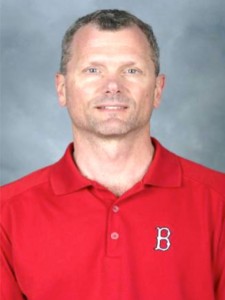 Dr. Mattfeld is the founder of Bright Bay Physical Therapy.

Bright Bay PT was established in 2001 fulfilling a lifelong dream of providing manual therapy to an orthopedic and sports practice. He has extensive experience as a physical therapist and athletic trainer and has been treating orthopedic and sports injuries for the past 28 years. Dr. Mattfeld has treated everyone from the professional athlete, weekend warrior, little leaguer, and senior. From January 2014 to November 2015, he served as the major league physical therapist for the Boston Red Sox. He spent 2 years traveling and working with the team bringing his unique manual therapy skills to the major league players. During the time spent with the Red Sox, Dr. Mattfeld also became a certified level 1 Functional Movement Screen specialist. This movement screen examines fundamental movement patterns, motor control, and competency of fundamental movement patterns.  This movement screen can help identify clients who may be at risk for injury and determine appropriate exercises for them.

Dr. Mattfeld has been bringing back these experiences and skills to the staff at Bright Bay PT. Dr. Mattfeld received his undergraduate athletic training education at SUNY Cortland and his master’s in physical therapy from Touro’s School of Health Sciences in Bay Shore NY. He completed his post-graduate doctorate in physical therapy at Touro as well. Dr. Mattfeld is also board certified in orthopedics by the American Physical Therapy Association.

Prior to opening Bright Bay PT, Dr. Mattfeld worked at Southside Health Institute for 10 years as the Sports Coordinator / Senior Clinical Specialist. During the time spent here he gained extensive training in manual therapy. Dr. Mattfeld has also been a member on the faculty of Touro since 1994. He began as a teaching assistant and eventually became a full-time instructor before becoming the Director of Clinical Education (DCE). Dr. Mattfeld has also presented and published research on the education of physical therapy students. During his time spent with the Red Sox, Dr. Mattfeld did not sever his ties with Touro. He retained a position of clinical assistant professor and has come back to offer insight to current students about his experiences working at a professional level.

Dr. Mattfeld is a member of the American Physical Therapy Association, The New York Physical Therapy Association, and the National Athletic Training Association. Dr. Mattfeld has been an active member of the Bay Shore community for over 20 years. He serves as the coordinator of Athletic Training Services for Bay Shore High School, and helped in the development of the policies and procedures for the district’s concussion management plan. He has been a major sponsor and volunteers for local events such as the Judi Shesh, Entermanns and Brightwaters Pumpkin Runs. He has lectured for local little leagues and on career day at Bay Shore Middle School. He was honored with the Man of the Year award by Bay Shore Athletic Sponsors. He also volunteers and serves on the Great South Bay YMCA Board of Directors.

Thank you for considering Bright Bay Physical Therapy as a partner in your health. Let us show you how our caring and attentive staff is different.